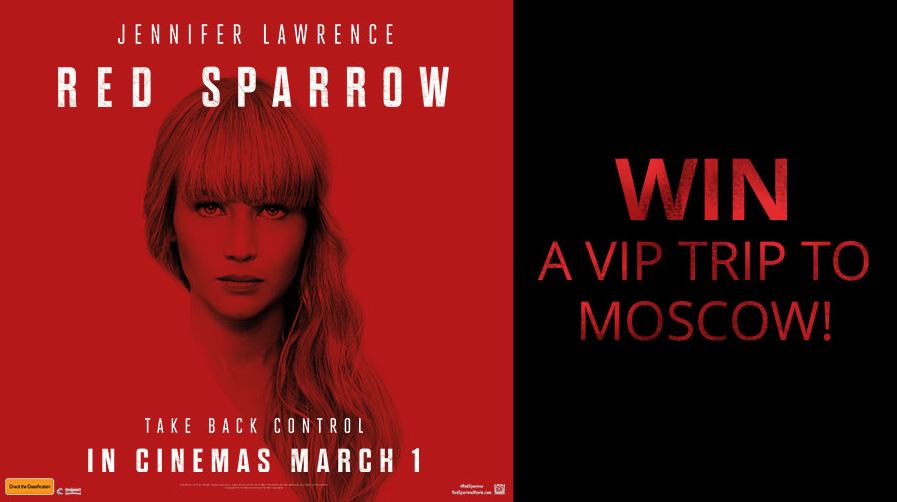 To celebrate the release of Red Sparrow, Network TEN has announced a new competition in which you can win a VIP trip to Moscow, including a VIP Private Behind-the-Scenes Of Ballet Tour At the Bolshoi Theater and more.

Competition is open to all residents of Australia, aged 18 years and over.

Click here to go to the Red Sparrow competition page at tenplay.com.au.

Click the “Enter Now” button and create a Tenplay account if you don’t have one already. Once you have logged in, answer the question on the competition page in 25 words or less.

Competition closes on Sunday 4 March 2018 at 23:59 AEDT. Winner will be the Entrant who, in the opinion of the judges, has submitted the most creative and original 25 words or less answer to the question on the competition page.

Major prize (one winner): A VIP trip to Moscow. Includes: - Roundtrip Flights to Moscow, Russia. - 5 nights' accommodation in the 5* hotel in Moscow featured in the film. - VIP Private Behind-the-Scenes Of Ballet Tour At the Bolshoi Theater. - Tickets to Bolshoi Ballet. - Lunch at Café Pushkin Featured in Red Sparrow.

The Tenplay Red Sparrow Competition commences on Sunday 18 February 2018 and concludes on Sunday 4 March 2018 at 23:59 AEDT.

Potential winner will be judged from all entries received throughout the competition period and one Major Prize Winner will be selected on Monday 5 March 2018.